In response to larger criticism leveled against social media companies taking foreign money for paid advertisements that influence American elections, Twitter announced a major change to its advertising policy that overcorrects so substantially that it outright bans many environmental, public health, and civil rights organizations from being able to target their messages.

Beginning November 22, Twitter changed its advertising policies to “globally prohibit the promotion of political content.” The policy cuts a broad swath through advertisements that advocate on electoral and policy matters. Advertisements that contain the following will no longer be accepted:

In addition, Twitter has imposed a bright line ban in the United States for advertisements by PACs, SuperPACs, and 501(c)(4) organizations. PACs and SuperPACs are typically political entities that support or oppose candidates, the former often in coordination with campaigns, the latter always independently. 501(c)(4)s are social welfare organizations that primarily focus on policy issues, but can also take a partisan stance on candidates as a secondary activity. They include environmental organizations like League of Conservation Voters, women’s reproductive choice advocates like NARAL, and civil rights groups like Human Rights Campaign.

The scope of this ban is breathtaking, not only for the subject matters covered and the absolute bans on entire categories of organizations, but also for the gaping holes that remain. For-profit corporations can still run paid advertising campaigns on the platform with little to no opportunity for an equivalent response from community organizations that oppose their actions.

For example, ExxonMobil’s paid ad seeks to refute reports that it has known about its products’ impact on climate change for decades. In June, it was able to pay for 271,000 impressions of a video ad that stated in the text, “Don’t be misled by news reports. WATCH to learn the real story behind #ExxonKnew.” This probably isn’t subject to the political content ban because it targets “media reports.” As a for-profit corporation, ExxonMobil is also not subject to a ban on ads across the board as an organization. 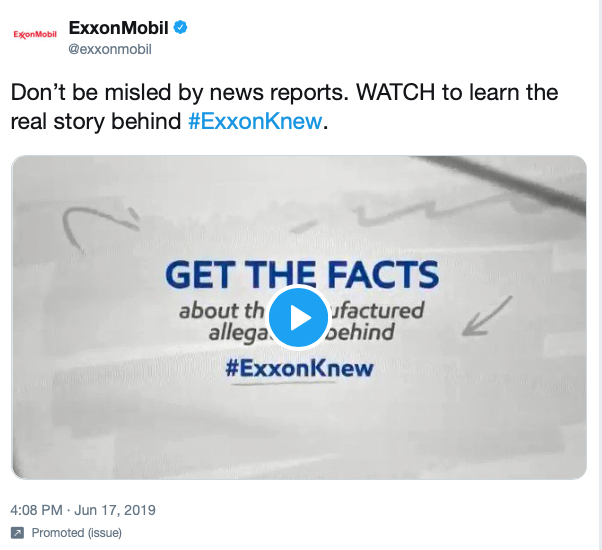 Contrast this with 501(c)(4) organizations that have purchased advertisements on Twitter on the subject of climate change. Environmental Defense Action Fund (EDAF) is a 501(c)(4) that paid for an ad in October targeted at communities that typically are impacted by hurricanes in the southeastern United States. 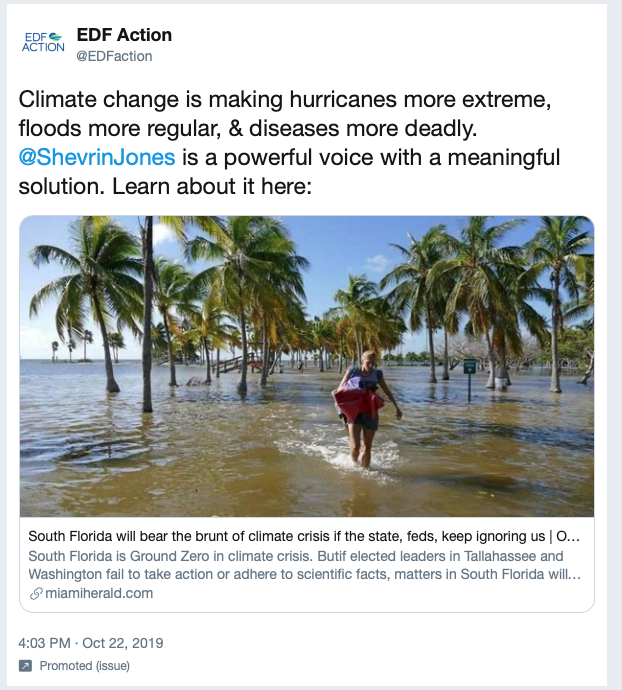 Its ad is effectively a retweet of a Miami Herald piece by State Rep. Shevrin Jones on the impact climate change will have on South Florida. Once the ad ban goes into effect, EDAF and other 501(c)(4)s will no longer be able to advocate with paid ads on the climate change crisis, while ExxonMobil will be able to proceed as if nothing has happened.

The ban is not limited to environmental issues. ACLU of Florida will no longer be able to target ads to reinfranchise Florida voters. ALZ Impact Movement, the 501(c)(4) advocacy arm of the Alzheimer’s Association, will be unable to run ads advocating for a cure. CARE Action, the 501(c)(4) affiliate of CARE will be unable to run its paid ads advocating for the end to global poverty. National Parks Action Fund won’t be able to pay for ads advocating for national parks, simply because it’s a 501(c)(4). NARAL will be prohibited from running ads on reproductive choice and women’s health care too.

This overly broad approach isn’t limited to progressive policies either. Just ask the conservatives at Americans for Tax Reform and America Rising Squared—when this policy goes into effect, their ads will be banned just like others. These are all real-world examples of advocates that will be muzzled, simply for being 501(c)(4)s.

To be clear, as a private corporation Twitter is legally allowed to make changes to its advertising platform without implicating the First Amendment rights of any person or organization. However, sometimes legal acts are staggeringly bad ideas. The backlash that has built across the political spectrum since the announcement will hopefully lead Twitter to reverse implementation of this particularly ill-conceived policy, and throw it back into the lab for a far more thoughtful and narrowly-tailored edit.