Our attorneys for this episode:

Not All Advocacy Counts as Lobbying

Communications aimed at executive orders or special purpose bodies like school boards (even though they are elected, those school boards don’t make new laws!).

Example: The incoming Biden Administration might be able to take executive action to dramatically expand the number of gun sellers required to do background checks.

What Counts as Direct Lobbying Under 501(h)

Remember that 501(h) is an expenditure test so it only counts what the organization spends on the communication that is lobbying (including staff time and overhead).

If you are an all–volunteer organization, you should keep track of your time for your own purpose but unpaid volunteer time wouldn’t be counted on the 990 at the end of the year. However, any expenses to facilitate volunteer lobbying (e.g., reimbursements for meals or travel associated with lobbying) would need to be tracked and reported.

Typically, the types of expenses you need to track are direct costs (e.g., travel costs), staff time, and overhead expenses.

The Three-Prong Definition of Direct Lobbying

Legislators (and their Staff)

The legislator that can make the decision needs to be the target of the communication. And it’s at any level of government – city, county, tribal govt., state, federal, even international.

It can be broader though to include his or her staff because those staff (like the policy director, or the chief of staff) are normally authorized to represent the views of their boss (the elected official).

What about the staff of the Committee on Appropriations when the nonprofit public charity seeks to ensure a line item in the budget to buy new land for a new state park?

What about public testimony at the committee hearing when a bill is being considered and the nonprofit says “we support this bill in its entirety?” In a later episode, we will talk about some exceptions, including being invited to give testimony.

Executive officials in certain situations, too.

Are members of the public ever considered “legislators”? Yes, when voting on public questions, referenda, constitutional amendments, bond measures. Anytime voters are asked to vote “yes” or “no” in an election, may constitute “legislators” for the IRS for your organization’s advocacy work.

The easy case is when the bill has a number, like HB 270.

How about a piece of model legislation that your nonprofit public charity is trying to get adopted in your state? Or asking for a law to be enacted that was recently enacted in a neighboring state?

Harder is when you’re working with a champion, an elected official that supports your mission, for example, to end homelessness. Is working with that officials’ office to highlight policy changes, perhaps discussing opportunities to revise statutes, or look for additional funding, is that lobbying? In some cases, you might just be educating legislators and not expressing a view on any specific legislation.

What about just an idea? The We Want World Peace bill where we’ll teach about peace instead of war? We want you to address climate change. We want you to prioritize arts in the budget. The context is important.

The Montgomery County Public School Board is holding a public hearing to discuss renaming Lee High School and the issue of Confederate statues. SONG shared this Instagram post. Does the post constitute Lobbying, what if SONG’s followers took these signs to the school board meeting? 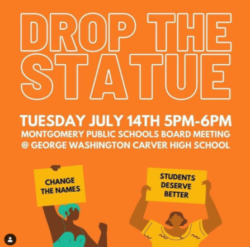 An example from the state of Texas. In Texas, the legislature meets every odd-numbered year. This year, there’s a bill by Representative Johnson that removes the Confederate Hero’s Texas State Holiday from the code.

Generally, if an Executive Director met with their local state representative to tell them to vote for removing this day, then that would be direct lobbying. Because, you have a (1) communication, (2) to the legislator, (3) on a specific bill.

When to Start Tracking Expenses

Almost always has to be you or your organization specifically sending something to a sitting official asking them to support a bill or ordinance.

Examples?  Let’s say your E.D. has an appointment with a city council member who historically has not supported funding for LGBTQ homeless shelters.  The staff prepares a report that the ED will use with the opposing city council member and the ED intends to specifically ask for the city councilmembers support for a new ordinance creating a shelter for LGBTQ kids.  What is the cost of the expenditures?