On June 24, 2022, the United States Supreme Court issued its ruling in Dobbs v. Jackson’s Women Health Organization, which held that the Constitution does not confer a right to abortion. Roe v. Wade and Planned Parenthood of Southeastern Pennsylvania v. Casey are overruled, and States may now regulate abortion. In other words, the Dobbs decision stripped away a pre-existing constitutional right, abandoned a 50-year precedent, and will now allow states to ban abortions altogether.

How Can Nonprofits Weigh-In

Nonprofit organizations have a right to speak up and act in response to the Dobbs decision.

As part of their advocacy efforts, public charities can lobby so long as they stay within their lobbying limits, and they can join forces with 501(c)(4) social welfare organizations to engage in nonpartisan advocacy that defends the right to choose. In light of the Dobbs decision, they can actively advocate to state legislatures for the passage of laws that expand abortion access at the state level or lobby against bills that would take abortion decisions out of the hands of patients and their doctors.

Nonprofits can also work to change the law by supporting ballot measures that would guarantee abortion access at the state-level or opposing those that would restrict it. While advocacy in support or opposition of ballot measures does qualify as lobbying, many public charities can maximize their lobbying limits by making the 501(h) election. For more on the 501(h) election and public charity lobbying limits, see Bolder Advocacy’s Being a Player publication.

Nonprofits can advocate in other ways as well. For example, nonprofits can write op-eds, draft a petition demanding change, or work with local district attorneys to ensure that those who receive or perform abortions are not subject to criminal prosecution. For more information and ideas on how to safely and boldly advocate for the cause please see our following resources:

Potential Legislative Proposals in the Wake of Dobbs

Many states and organizations have already begun to pursue legislation to protect abortion access. Some proposals include:

Now we must consider what is in store for the future in the wake of the Dobbs decision. The Court’s decision is a blatant violation of personal autonomy and could lead to the erosion of several other constitutional rights. This is why nonprofits should use their platforms to take a stand against injustice. It is time that we the people reclaim our power.

Today, we fight, and tomorrow… we fight again.

#StopTheBans
Leslie Barnes | June 3, 2019
As state lawmakers act with lightning speed to ban abortions, fierce and experienced advocates in the reproductive justice space have been hard at work to prote 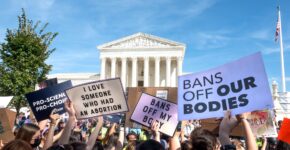 Nonprofits Have a Right and Responsibility to Respond to Dobbs v. JWHO
Leslie Barnes | May 5, 2022
Nonprofits can and should hold government accountable. To do so, public charities must act to further their charitable mission and remain nonpartisan.
Helping nonprofits and foundations to advance their mission and serve their communities through advocacy.
Donate