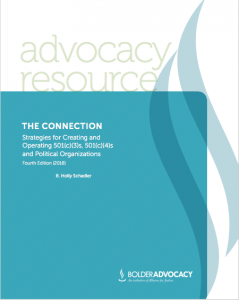 The 4th Edition of The Connection is now available.

Since it was first published in 1998, The Connection has provided nonprofits with guidance on how they can engage with the public, lawmakers, and candidates to affect public policy, and how these organizations can coordinate together, even in an election year. This guide focuses on the role c4 organizations play in our democracy—as stand-alone organizations but also in conjunction with affiliated c3s and with political organizations (PACs).

Learn to what extent 501(c)(3) and 501(c)(4) organizations can coordinate with each other and various political organizations. Understand how nonprofits can share office space, equipment, and even staff with political organizations, including candidates. Gain a better understanding when and how nonprofits can engage with candidates and even comment on the election. This publication is complete with real-life examples, reporting tips, and sample agreements. It is designed as a resource but does not provide legal advice.”

This fourth edition includes updates to the law since the 2012 edition:

The 2019-2020 cycle federal contribution limits have been released, and reflect increased limits due to inflation.

A “contribution” includes any gift, subscription, loan, advance, or deposit of money or anything of value made by any person for the purpose of influencing any election for federal office. So, the group does not have to report all of the donations it has received, but it will have to determine which receipts meet this description. Without further FEC or judicial guidance, a group should consider, at a minimum, as to each receipt (i) the language and context of its solicitation, (ii) the donor’s expressed intent, and (iii) any other factors that may bear on identifying the purposes of the donation.

The FEC issued guidance on disclosure of contributors and the standards for quarterly reports due from all groups that are not FEC-registered political committees when they make federal independent expenditures aggregating over $250 during the quarterly reporting period. This FEC guidance describes what information about donors is expected in order to comply with the U.S. District Court’s August 3, 2018 ruling in CREW v. FEC, which invalidated the longstanding FEC regulation that required groups to report only contributions they received whose purpose was to support their particular reported independent expenditures. On August 21, 2020, the United States Court of Appeals for the District of Columbia affirmed the lower court’s decision.

In a non-precedential “private letter ruling,” PLR 202005020 here, the IRS concluded that a public charity would violate its 501(c)(3) status if it were the sole shareholder of a for-profit subsidiary that establishes and operates a 527 political committee and uses the public charity’s resources, including employees and offices, for that purpose, even where the PAC pays fair market value to the public charity for those resources.  This ruling raises unanswered questions and appears inconsistent with IRS’ prior guidance and well-established law based on the principles set out in judicial precedents including Regan v. Taxation with Representation, 461 U.S. 540, 545 (1983), and Moline Properties, Inc. v. Commissioner, 319 U.S. 436 (1943); as always, AFJ recommends consulting legal counsel.Of course, we will keep you informed of further developments in this area.

This work is licensed under a Creative Commons Attribution-NonCommercial-NoDerivatives 4.0 International License.

06/13/2018
Helping nonprofits and foundations to advance their mission and serve their communities through advocacy.
Donate